Blog - Latest News
You are here: Home / Blog Post / Bryley Basics: What happens when a home is smarter than its owner? 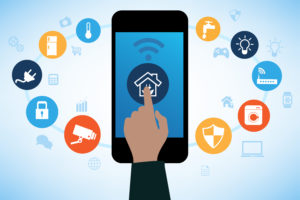 Today, if we forget to turn off the coffee pot, or shut the garage door, we can simply hit a button on our phones, or other devices. According to a study by Intel Corporation, 71% of the population is expected to have at least one smart-home device in every home by 2025.1

This is great news for those of us that are forgetful, but one has to be wary of how much access is granted through these devices. Just like you wouldn’t leave your house keys out for anyone to take, you must also be cognizant of the security of your smart devices.   Last year, hackers were able to bring down several sites by using home devices connected to the internet such as baby monitors, cameras, and home routers without the user’s knowledge.1

There are several steps users can put in place in order to take advantage of these smart devices while remaining protected:

Do your research. Not all smart devices were made equal. It is best to do some research prior to purchasing a device to see what security measures the manufacturers have implemented. Will the device automatically perform patch updates? Does it require a passcode? Will it prompt you to change your password? Knowing this ahead of time, will give added peace of mind.

Secure your devices. By default, many of these devices have a simple security plan in place, since historically they haven’t needed to worry about cyber threats. Prior to a few years ago, no one would have thought you could have your refrigerator tell you what items you would need to purchase on your next grocery trip! Make sure your device requires a passcode that you can regularly update.

Regularly update your Passwords. Make sure to change your password every 60-90 days with a complex password using a mixture of capital and lowercase letters, numbers, and symbols. A password does nothing if it remains at the default factory password.

Separate your Network. As an added layer of protection, put some separation between your devices and the rest of your data. Most of the time, these devices only need an internet connection, so putting them on a different network from the rest of your data protects both of them. “Newer WiFi routers have built-in guest network capabilities that can isolate untrusted devices from each other and from the rest of your network – a useful feature for most devices that only need internet access and don’t need to talk to other devices. Extra configuration may be required to properly secure devices that need to talk to each other (like automation controllers and security cameras), but it’s possible to limit that communication without laying bare the rest of your home’s network.”2

Perform Regular Updates. Some devices will automatically update while others you will have to check. Regardless, it is best to check every so often to ensure the updates are performed and you are protected.

Security of these smart devices is such a concern, Senators Mark Warner, Cory Gardner, Ron Wyden and Steve Daines introduced the “Internet of Things Cybersecurity Act” aimed at forcing tech companies “to ramp up security if they want to sell connected devices to the federal government.”3 This bill is the bare minimum and will block any “IoT devices with known security issues from government use and require device makers to patch any new flaws. Security researchers who hack IoT devices used by the federal government in order to find new flaws would be exempt from the Computer Fraud and Abuse Act, which has been used to charge hackers.”3 It is the hope that this bill will encourage companies to adopt these regulations as standard for commercial sectors as well.

At the end of the day, these devices will become more and more commonplace. As this occurs, security will also improve. There are sure to be growing pains, but like most evolutions, it will improve our lives.