Twelve Members of the Ambassadors Committee were treated to an engaging account of the Massachusetts militia (known as the Powder Horns), from its origins in the mid-1630s – the oldest militia in the USA – to more recent efforts domestically (post-Katrina support, transporting medical personnel during the Ice Storm of 2008, etc.) and internationally (Bosnia, Iraq, Afghanistan, and others).

Ambassadors were also informed of the important work of the Massachusetts National Guard Family Program Office, which supports families of current military personnel and veterans.

A weapons and field-equipment display and discussion was followed by a tour of several Humvees equipped as ambulances.
Many thanks to Lieutenant Colonel Luis Rodriguez and Captain Langdon Mavrelis of the Powder Horns, along with Nick and Elaine of the National Guard Family Program Office, for hosting this program. 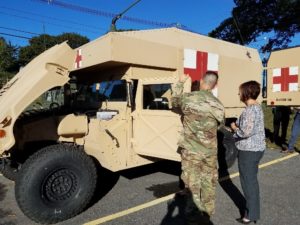 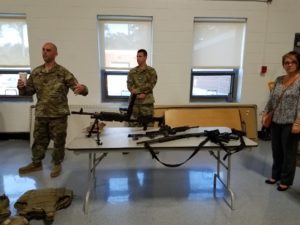